See link below for schedule.

CÉCILE B. EVANS—INSTALLATION AND PERFORMANCES

Cécile B. Evans, A Screen Test for an Adaptation of Giselle (2019). Images © Cécile B. Evans, courtesy of the artist, Galerie Emanuel Layr, Vienna, and Château Shatto, Los Angeles.

A selection of the photographs of Jean Baudrillard—THE CONSPIRACY OF ART: PART I—is now on view at Château Shatto.

“It is not true that we need to believe in our own existence to live… Our consciousness is never in fact the echo of our own reality, of our existence in ‘real time,’ but rather the echo in delayed time, the dispersion screen of the subject and its identity. We are only distinguishable from ourselves in sleep, unconsciousness, and death. This consciousness, which is something altogether different than belief, comes more spontaneously from challenging reality, from siding with objective illusion than from objective reality. This challenge is more vital for our survival and for the survival of the species than the belief in reality and existence, which are spiritual consolations for use in another world.” — Jean Baudrillard*

DIE WELT ALS LABYRINTH, the title of MAMCO’s current exhibition on the Letterist and Situationist International movements, refers to an “unfulfilled project for a Situationist exhibition at the Stedelijk Museum in Amsterdam in 1960”:

“How to exhibit in a museum people who were systematically opposed to cultural institutions? Going further than a sabotaging of art through an unconventional register of forms and techniques, it was art as distinct social territory, governed by institutions, and determined by the market economy, that was in these movements’ crosshairs.”*

DIE WELT ALS LABYRINTH, through May 6. 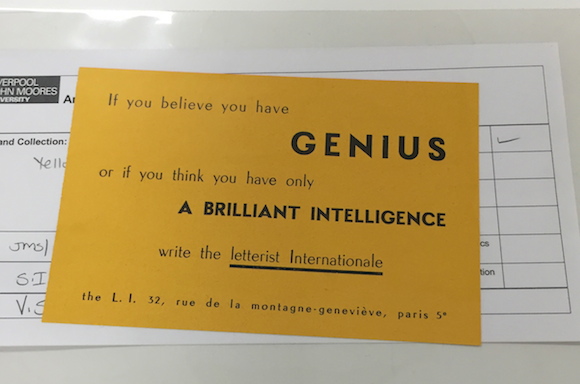