I live in a world now where everything is “delegated” to photography. Nothing is left to memory, your own memory. What I’m interested in, instead, are things that can’t be seen, not those that can be… I have always labored under the illusion—but I also think it was true—that nobody ever photographed me. Because my face is not for sale. The real me is not photographable. — Benedetta Barzini, to Beniamino Barrese

Beniamino Barrese is the son of Benedetta Barzini—the first Italian model to appear on the cover of American Vogue—and his mother’s obsessive interlocutor throughout his documentary THE DISAPPEARANCE OF MY MOTHER, one of the year’s best.

Summoned by Diana Vreeland in the mid-1960s to come to New York for a few weeks, Barzini stayed for a few years, a sought-after subject of Richard Avedon, Bert Stern, and Andy Warhol, a confident of Gerard Malanga and Salvador Dalí, and an acquaintance of Marcel Duchamp.

Barzini was a double-rebel. Modeling in Manhattan put a necessary distance between Barzini and her parents—heiress Giannalisa Feltrinelli and writer Luigi Barzini, Jr., author of The Italians. But the trajectory of second-wave feminism in the 1970s opened Barzini’s eyes to the ornamental condition of women, and she returned to Italy and became an activist and left-wing academic.

I asked myself this question: Why do we have prototypes of beauty? Why are models at the bow of the ship and the other women are squashed together into the stern? Why? Because men invent women… Maybe it would be better if female bodies disappeared from men’s imaginations. — Benedetta Barzini

Barzani explains to her son that the camera is a dangerous liar because within its capture of arbitrary moments, it “freezes” life “within a limited boundary,” contaminating thought and inscribing conformity. “I don’t like frozen things… I don’t know if you’ve noticed, but there are a hundred million photos of sunsets. Frankly, they’re all the same. But they weren’t the same when you saw them.”

Barzini is by turns loving and exasperated with her son and his never-ending investment in images and their documentation. Yet Barzini still models herself—recently appearing in Simone Rocha‘s Fall-Winter 2017 show in London. Nothing if not contradictory, Barzini wants to remove herself from a world she finds deplorable, railing against ambiguity yet unsure which entrance to the void she should walk through. She explains to Barrese that their work together on this film is an act of “separation.” The filmmaker sees it differently, and together they find a sense of an ending.

THE DISAPPEARANCE OF MY MOTHER

Pink is the navy blue of India. — Diana Vreeland

Long before her international fame as editor-in-chief of Vogue in the sixties and the “Empress of Fashion” at the Met’s Costume Institute in the seventies and eighties, Diana Vreeland was a legend in Manhattan creative circles. As Harper’s Bazaar‘s fashion editor, she was the inspiration for Allison Du Bois in the Kurt Weill-Ira Gershwin-Moss Hart musical Lady in the Dark (1941). And Kay Thompson played Maggie Prescott, a version of Vreeland, in the dazzling Paramount musical FUNNY FACE (1957, directed by Stanley Donen).

Upon discovering Jo Stockton (Audrey Hepburn), a lovely, philosophical clerk in a Greenwich Village bookstore, Prescott and photographer Dick Avery (Fred Astaire, in a role based on Richard Avedon) sweep Jo uptown for a test shoot. Maggie orders her office minions to chop off Jo’s hair and paint her with a “marvelous mouth.” Jo resists, but gives in once she realizes her new modeling gig comes with a paid trip to Paris, home of Jean-Paul Sartre.

This weekend, as part of its series Runaway Hollywood—Global Production in a Postwar World, the UCLA Film and Television Archive will screen FUNNY FACE, followed by the black-and-white Paul Newman-Sidney Poitier vehicle PARIS BLUES (1961, directed by Martin Ritt). The story of two American jazz musicians in Paris, the tourists they fall for (Joanne Woodward and Diahann Carroll), and the Latin Quarter dives at the center of their expat scene, PARIS BLUES features a score composed by Duke Ellington and Billy Strayhorn.

Nearly thirty years after his death, Halston—the master of American minimalism and fashion’s greatest cautionary tale—has finally received a documentary worthy of his contributions. Unlike the designs of its subject, the film is somewhat padded with yards of unnecessary material. But this should not deter its intended audience from enjoying the ensemble.

Directed by Frédéric Tcheng—the filmmaker behind documentaries about Raf Simons (Dior and I) and Diana Vreeland (The Eye Has to Travel)—HALSTON hits an early peak when, one after another, his core house models—dismissively labeled “Halstonettes” by Loulou de la Falaise—testify to the talent of the man who could throw a bolt of fabric onto the showroom floor and, within minutes, create the basis of a couture gown:

“[Wearing a Halston dress imparted] elegance and ease. A sense of owning power without being masculine. And honoring the body you have.” — Alva Chinn

“You were free inside his clothes.” — Karen Bjornson

“He took away the cage. You didn’t really need the structure as much as you needed the woman. He really based most of his collections on us girls.” — Pat Cleveland

So where did it all go wrong? Cocaine and Studio 54 may have started the slide—and in the film, jewelry designer and Halston confidante Else Peretti gives a hilarious digression on mind-altering substances and their use:

“We worked all night… we didn’t get high… yes, we smoked, but no hard drugs… well, maybe a little coke…”

Because when you’re working all night…

But the man who introduced Halston to Studio 54, illustrator Joe Eula, traces the designer’s fall to the delusions of grandeur that set in after the move to the Olympic Tower studio, with its lofty, across-the-street view of St. Patrick’s spires.

“Halston is a middle-of-the-road man who’d be better as a buyer in a store, or a stylist. He knows how to select good things to copy. But his passion is to put his name on it, for which action the word ‘plagiarism’ is correct.”

In the film, Fred Rottman, a workroom supervisor at Halston, is quick to deflect:

“Halston didn’t copy. He took concepts of Charles James’ and relaxed them.”

Halston’s era—the 1970s and early ’80s—was a time of out-of-control franchising. A designer sold his name to and sometimes designed for an array of manufacturers, slapping the cachet of his or her moniker on, yes, perfume and handbags, but also bedsheets, luggage, rugs, car interiors, and—in Halston’s case—uniforms for Braniff Airlines and the Girl Scouts of America.

This obsession to design everything for everyone, trading “class” for “mass,” led to the sale of his company to a conglomerate—a subject the film spends far too much time on. Suffice to say, Halston lost his judgment: How could he imagine that Bergdorf Goodman would want to carry a brand that was also hanging on the racks at J.C. Penney?

The director will participate in post-screening Q & A’s after the 7 pm shows on Friday and Saturday, May 31 and June 1.

On June 7, HALSTON will open at the Monica Film Center in Santa Monica, the Playhouse 7 in Pasadena, and the Town Center 5 in Encino.

Lisa Immordino Vreeland—director of documentaries about her grandmother-in-law Diana Vreeland, and Peggy Guggenheim—turns her eye to photographer, diarist, and set and costume designer Cecil Beaton in her new film LOVE, CECIL.

Vreeland will be at the Nuart this week for a post-screening Q & A. 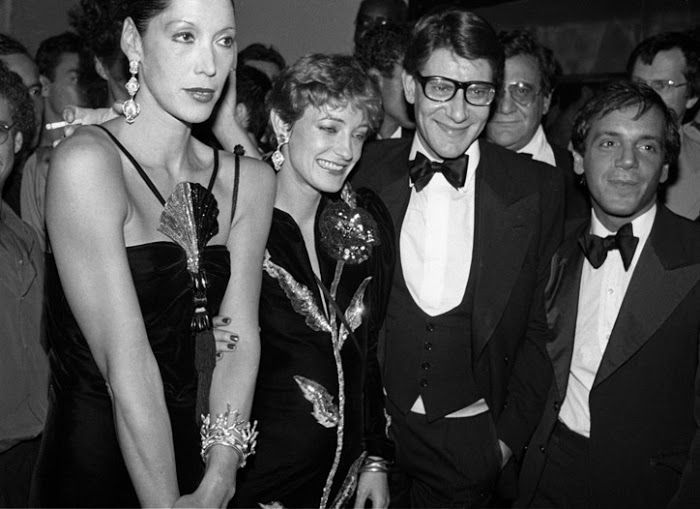 “This book is an oral biography of Paris fashion between the glittering years when Loulou was the light between all the characters.” — André Leon Talley

Christopher Petkanis’ LOULOU & YVES: THE UNTOLD STORY OF LOULOU DE LA FALAISE AND THE HOUSE OF SAINT LAURENT is a massive oral history centered around the life and times of YSL muse and employee Loulou de la Falaise. 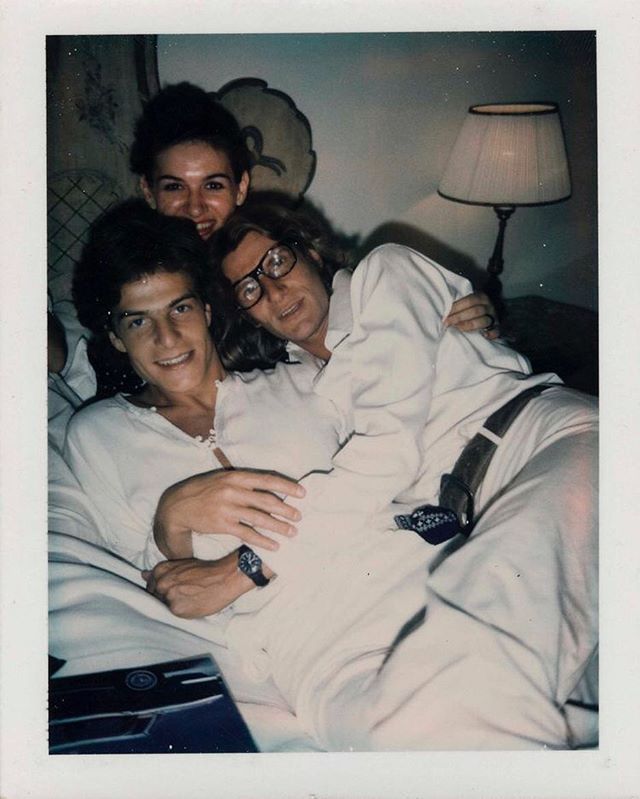 Below: YSL and de la Falaise.