ACID-FREE is back at Blum & Poe. Join nearly 100 publishers and galleries for a full weekend of talks, readings, signings, music, food, drink, and—of course—books and publications for perusal and sale.

This year, PARIS LA is happy to share a table with F magazine

See link below for schedule and details.

K8 Hardy’s directorial debut OUTFITUMENTARY (2016) will screen this week as part of the Jason Simon series Blame the Audience at MOCA.

Also on the bill: If Andy Warhol’s Super-8 Camera Could Talk, directed by Roddy Bogawa, and Tiger Morse, directed by Warhol.

“In K8 Hardy’s performances, the body makes itself a transmitter in order to update and queer the world with its broadcasts….If contemporary art is first and foremost a system for producing subjects in the form of contemporary artists…it’s probably time for artists to rethink their own role in this system’s reproduction….Instead of simply feeding the network in new and creative ways, artists would get more involved in de-creation, and engage subjectivization as an ever-recurring opportunity for unworking.” — John Kelsey*
K8 Hardy, Raúl de Nieves, and Participant present BEAUTIFUL RADIATING ENERGY, with de Nieves in a piece Hardy first performed at Reena Spaulings in 2004. 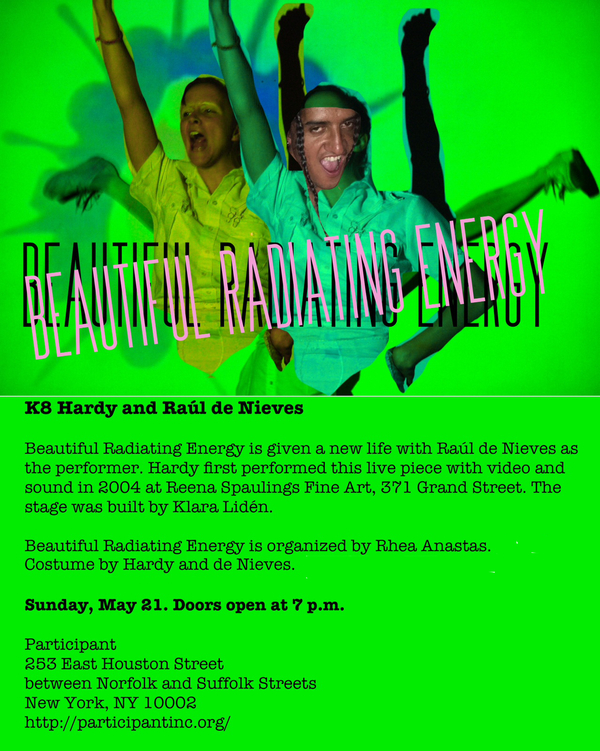