Program A includes new work by L.A. Dance Project dancers Janie Taylor (ADAGIO IN B MINOR) and Gianna Reisen (RISING WATER)—as well Kyle Abraham’s CHAPTER SONG. This fast-moving piece of vignettes and quick cuts features costumes and text by the choreographer, voiceover by Carrie Mae Weems, and music by everyone from Philip Glass and Barbra Streisand to Outkast and Kendrick Lamar.

All performances at 8 pm.

Set to music by Nico Muhly, Jay-Z, James Blake, and Kanye West, THE RUNAWAY is part of the company’s winter season New Combinations program, and will be preceded by William Forsythe ’s Herman Schmerman, and a new dance by Justin Peck, Principia (music by Sufjan Stevens).

The great dancer and choreographer Kyle Abraham brings a special presentation of his work DEAREST HOME—“an interactive dance work developed over multiple years, focusing on love, longing and loss”—to UCLA, where he is a faculty member in the department of World Arts and Cultures/Dance.*

The various solos, duets, and small groups that make up DEAREST HOME will be performed “in the round,” with a score by Jerome Begin that is optional – depending on whether you chose to wear the seatside headphones or not. 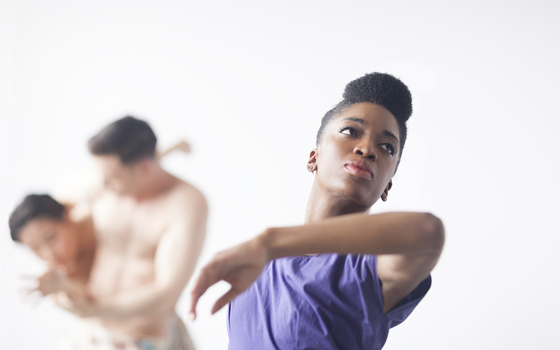 Dancer-choreographer Kyle Abraham and his company Abraham.In.Motion bring two evenings of contemporary dance to the Broad Stage this weekend, featuring the California premieres of THE QUIET DANCE, and ABSENT MATTER (with music composed and arranged by Kris Bowers and Otis Brown III). There’s also GREY, a solo for company dancer Marcella Lewis, and the Max Roach-inspired THE GETTIN’.

A MacArthur Fellow—and recipient of the Jacob’s Pillow Dance Award, the Doris Duke Artist Award, and a Bessie—Abraham was the resident choreographer at New York’s City Center in 2015. Called the “best and brightest creative talent to emerge in New York City in the age of Obama” (Out magazine), Abraham’s work has brought local audiences to its feet at Royce Hall (When the Wolves Came In, 2015), and the Dorothy Chandler Pavilion, when the Ailey company danced Abraham’s Untitled America earlier this year.

In September 2016, Abraham joined the faculty of UCLA’s Department of World Arts and Cultures/Dance.

“I learned a lot from [choreographer and Merce Cunningham dancer] Neil Greenberg. He used to talk about enactment versus performance. And I’ve always been more interested in the enactment—something that you’re just walking in upon and just happen to see…. It makes the work more personal.” — Kyle Abraham*