In TRIPTYCH (EYES OF ONE ON ANOTHER), composer and guitarist Bryce Dessner of The National has collaborated with playwright Korde Arrington Tuttle, the LA Phil New Music Group, Roomful of Teeth, videographer Simon Harding, lighting designer Yuki Nakase, and the Robert Mapplethorpe Foundation for an musical-visual investigation into the ways the photographer’s works “compel an audience’s complicity and characterizes them in the act of attention.”*

Tuttle’s libretto integrates the poetry of Mapplethorpe detractor Essex Hemphill and advocate Patti Smith, and the featured vocalists for this world premiere are Isaiah Robinson and Alicia Hall Moran, the latter of whom will perform later this week in Carrie Mae Weems’ Past Tense at the Theatre at Ace Hotel.

TRIPTYCH is directed by Kaneza Schaal and conducted by Sara Jobin. Music direction is provided by Brad Wells.

TRIPTYCH (EYES OF ONE ON ANOTHER)*

The world premiere of Philip Glass’ 12th symphony—an interpretation of David Bowie and Brian Eno’s music for LODGER—will be conducted this week in Los Angeles by John Adams in a program that includes Gabriella Smith’s Tumblebird Contrails and Adams’ Grand Pianola Music.

The Youth Orchestra Los Angeles (YOLA) is getting a new, permanent home in Inglewood, and its architect Frank Gehry will join Gustavo Dudamel, Inglewood mayor James T. Butts, Jr., and CEO Simon Woods this week for the unveiling of the project’s design.

Under the leadership of Dudamel and the L.A. Phil, YOLA provides young people with free, high-quality music education and academic support.

Gehry’s design will transform an existing 17,000 sq. ft. structure at Manchester and La Brea into a purpose-built facility. This project is made possible through a gift from Judith and Thomas L. Beckmen.

1967, the Summer of Love, was a turning point in Harrison’s life. San Jose State invited him to join their faculty—providing a level of financial security Harrison had not previously enjoyed—and he met Bill Colvig, a musician and brilliant instrument-maker. Lover, best friend, collaborator, it was Colvig who suggested a same-sex theme for Harrison’s opera project, and the composer chose young Gaius Julius Caesar’s love affair with Nicomedes, the Orientalist king of Bithynia. The LA Phil production, part of their Green Umbrella series, stars Adam Fisher in the title role, Hadleigh Adams as Nicomedes, and Bruce Vilanch as the narrator.

Harrison had studied and absorbed his close friend Harry Partch’s theories about Just Intonation—a tuning system of corrected intervals and precise pitch. Since YOUNG CAESAR would incorporate world music from the East as well as the West, for its creation Harrison and Colvig built a gamelan of tuned metal slabs, dubbed “Old Granddad.”

YOUNG CAESAR (libretto by Robert Gordon) will be performed by the LA Phil New Music Group and experimental opera company The Industry. The choreography for this production is by Danny Dolan. 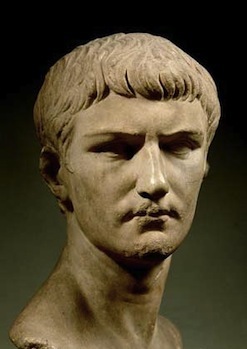