Robert Silvers was a brilliant, demanding, funny, painstaking, and inspiring editor, a walking chronicle of postwar literary-political history, an intimidating sweetheart, and very dear to me. At the end of an editorial session, once he had identified all your piece’s weaknesses, evasions, and missed opportunities, he would close with a brusque, even peremptory, but always, somehow, hopeful, “See what can be done.” In the world according to Silvers, there was always something to be done. — Michael Chabon

The New York Review of Books was founded in 1963 by Barbara Epstein, Jason Epstein, and their West 67th Street neighbors Elizabeth Hardwick and Robert Lowell during an extended newspaper strike in New York City. They asked their friend Robert Silvers to edit the broadsheet—and he agreed, if Barbara would join him as co-editor.

Before Silvers died in 2017, Martin Scorsese and David Tedeschi filmed the editor in his domain. The resulting film—THE 50 YEAR ARGUMENT, narrated by Michael Stahlbarg—documents the history of the paper with in-person interviews and a rich selection of clips. The film is available through HBO Max and is streaming free in September, courtesy of the Review.

THE IRISHMAN actually started about thirty-five years ago with the idea of the remake of The Bad and the Beautiful and the sequel Two Weeks in Another Town. Somehow we exhausted that. And so when [Robert De Niro] came across this story and gave it to me, he said: “You know, this is an amazing part for Joe, if he wants to do it.” And also for Al Pacino—and I never worked with Al all these years, you know? We just knew that they were right for it. And then we looked at each other and realized we were meant for this somehow. It’s not necessarily a culmination, but a sense of contemplation of where we are, near the end of our lives. — Martin Scorsese

To open the American Cinematheque series The Films of Marty and Bob, Scorsese and De Niro will participate in a full discussion about forty-five years of cinematic collaboration, followed by a screening of their latest masterpiece THE IRISHMAN.

He was central to the Laurel Canyon scene of the 1960s, created some of the most resonant music of his era, fell in love with Joni Mitchell, became addicted to heroin and cocaine, and—after a weapons and drug conviction—became a fugitive from the law.

But it wasn’t until after his eventual arrest, getting clean in prison, and restarting his musical life with old bandmates that David Crosby managed to alienate every important person he made music with—Roger McGuinn (The Byrds), Stephen Stills, Graham Nash, and Neil Young.

Such is the intractable nature of the subject of the essential new documentary DAVID CROSBY—REMEMBER MY NAME, directed by A. J. Eaton and produced by Cameron Crowe, who has known Crosby since Crowe was a teenage reporter for Rolling Stone. In Eaton’s film, Crosby praises the artist “who was the best of all of us”:

“When [Joni] found she was going over people’s heads, she went further.”

But no one is harder on Crosby than Crosby himself:

“I was a difficult cat. Big ego, no brains… What you do to yourself isn’t really a moral thing. But what you do to others? That counts… Were those girls addicted? Yes. And I addicted them.”

But there is another sticking point:

“I have to tour to buy groceries and pay the mortgage…. I’m under some pressure. I’m the only member of CSN&Y who’s never had a [solo] hit.”

A fitting companion piece to Martin Scorsese’s new Bob Dylan doc Rolling Thunder Revue—in REMEMBER MY NAME, Crosby claims it was The Byrds’ cover of “Mr. Tambourine Man” that inspired Dylan to go electric—what echoes up and down the canyon are the sounds of a lost sixties dream:

” ‘Ohio’ was the best job of being troubadours or town criers we ever did… Belief is good. It didn’t work out. Yet. But we’re trying.” — David Crosby

At the Film Independent Presents screening this week in Hollywood, Crowe characterized the film as “notes from the eye of the hurricane” which ends “on a precipice, where CSN&Y don’t reconcile.” On Sunday afternoon, Eaton and Crowe will return to the ArcLight and join David Crosby for a post-screening Q & A.

DAVID CROSBY, A. J. EATON, and CAMERON CROWE Q & A

“I got to wandering around at night; I couldn’t sleep because I was so depressed. I’d stay in bed till four or five pm, then I’d say, ‘Well, I can get a drink now.’ I’d get up and get a drink and take the bottle with me and start wandering around the streets in my car at night. After the bars closed, I’d go to pornography. I’d do this all night, till morning, and I did it for about three or four weeks, a very destructive syndrome, until I was saved from it by an ulcer: I had not been eating, just drinking.

“When I got out of the hospital I realized I had to change my life because I would die and everything; I decided to leave L.A. That was when the metaphor hit me for TAXI DRIVER, and I realized that was the metaphor I had been looking for: the man who will take anybody any place for money; the man who moves through the city like a rat through the sewer; the man who is constantly surrounded by people, yet has no friends. The absolute symbol of urban loneliness. That’s the thing I’d been living; that was my symbol, my metaphor. The film is about a car as the symbol of urban loneliness, a metal coffin.” — Paul Schrader, on writing the screenplay for Martin Scorsese’s film. Interview with Richard Thompson* 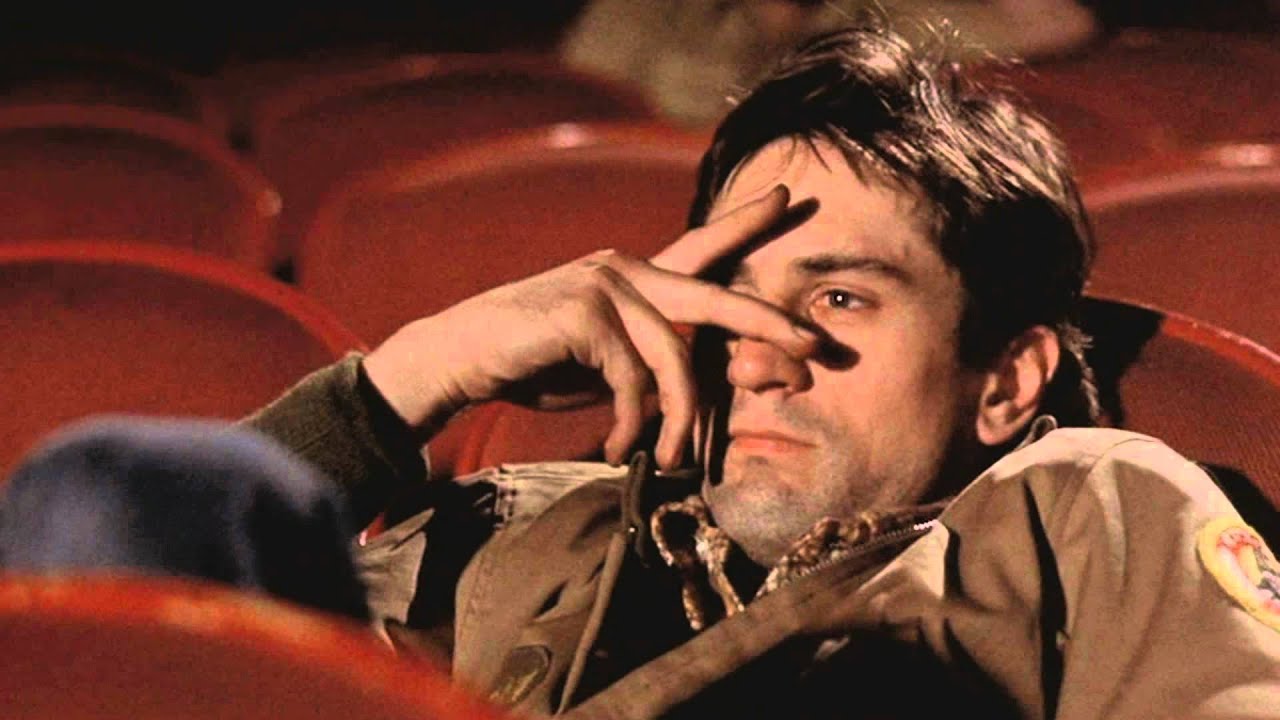 Long before he directed Isabelle Huppert and Philippe Noiret in Coup de torchon, Dexter Gordon in Round Midnight, or Dirk Bogarde and Jane Birkin in Daddy nostalgie, Tavernier was a cinephile par excellence. In his youth he founded a cinema club, wrote for Cahiers du cinéma, was an assistant to Jean-Pierre Melville, a publicist for Raoul Walsh and John Ford, and co-authored the volume 30 ans de cinéma américain (and its update 50 ans…, both with Jean-Pierre Coursodon).

And he went to thousands of movies: in his hometown of Lyon, at a sanitorium in St. Gervais (recovering from childhood TB), in his boarding school village, and in Paris, a film-lover’s Valhalla. What he saw during those years he’s brought to the screen in his very personal new documentary VOYAGE À TRAVERS LE CINÉMA FRANÇAIS.

“A remarkable work, made with great intelligence. VOYAGE is enlightening about classic French cinema, and about many forgotten or neglected filmmakers. You are convinced that you know all that by heart, until Tavernier comes along to reveal to us the pure beauty of it all.” – Martin Scorsese