The rise of the feminist movement and the globalism that exposed United States audiences to other cultures were two energizing forces for artist Constance Mallinson, coinciding with the artist’s late-1970s move to Los Angeles. Mallinson worked downtown, creating paintings and drawings that channeled the form and logic of weaving. She focused her attention on employing pattern as a bridge between minimalist aesthetics and a more personal and feminine approach as part of the Pattern and Decoration art movement.

Mallinson joins MOCA assistant curator Rebecca Lowery in a conversation about her practice then, now, and in the context of the exhibition WITH PLEASURE—PATTERN AND DECORATION IN AMERICAN ART 1972–1985.*

Noah Davis (1983–2015) was a figurative painter and cofounder of the Underground Museum (UM) in Los Angeles. Despite his untimely death at the age of thirty-two, Davis’ paintings are a crucial part of the rise of figurative and representational painting in the first two decades of the twenty-first century.

Loneliness and tenderness suffuse his rigorously composed paintings, as do traces of his abiding interest in artists such as Marlene Dumas, Kerry James Marshall, Fairfield Porter, [Mark Rothko], and Luc Tuymans. Davis’ pictures can be slightly deceptive; they are modest in scale yet emotionally ambitious. Using a notably dry paint application and a moody palette of blues, purples, and greens, his work falls into two loose categories: There are scenes from everyday life, such as a portrait of his young son, a soldier returning from war, or a housing project designed by famed modernist architect Paul Williams. And there are paintings that traffic in magical realism, surreal images that depict the world both seen and unseen, where the presence of ancestors, ghosts, and fantasy are everywhere apparent.

Generous, curious, and energetic, Davis founded—along with his wife, the sculptor Karon Davis—the Underground Museum, an artist- and family-run space for art and culture in Los Angeles. The UM began modestly—Noah and Karon worked to join three storefronts in the city’s Arlington Heights neighborhood. Davis’ dream was to exhibit “museum-quality” art in a working-class black and Latino neighborhood. In the early days of the UM, Davis was unable to secure museum loans, so he organized exhibitions of his work alongside that of his friends and family, and word of mouth spread about Davis’ unique curatorial gestures.

In 2014 Davis began organizing exhibitions using works selected from the MOCA Los Angeles’ collection as his starting point. In the aftermath of Davis’ passing, the team of family and friends he gathered continued his work at the UM, transforming it into one of the liveliest and most important gathering places in Los Angeles for artists, filmmakers, musicians, writers, and activists. — Helen Molesworth

The exhibition NOAH DAVIS—curated by Molesworth—is now on view at David Zwirner in New York. An iteration of the show will open at the Underground Museum in Los Angeles in March 2020.

A new Davis monograph—featuring an introduction by Molesworth and oral history interviews that she conducted with Davis’ friends, family, and colleagues—is forthcoming.

A sequel of sorts to the recent American Cinematheque series For the Love of Godard arrives this weekend at the Aero.

CONTEMPT (Le Mépris) and ALPHAVILLE will screen, as well as 35mm prints of LE PETIT SOLDAT and MADE IN U.S.A.—Anna Karina’s last film for Jean-Luc Godard, featuring a cameo by Marianne Faithfull.

And if you missed last year’s MOCA screening of ONE PLUS ONE—Godard’s documentary incorporating the Rolling Stone’s “Sympathy for the Devil” recording sessions—it will be at the Aero Sunday night.

ALPHAVILLE and MADE IN U.S.A.

Using Yang’s installation as its stage, the performance by Emile and three other dancers examines the “public display and consumption of violence against marginalized bodies and investigates how African-Americans process trauma.”*

In collaboration with the Getty Conservation Institute, MOCA has been conducting – in public – a conservation of Jackson Pollock’s abstract expressionist painting NUMBER 1, 1949 (1949), part of the collection since 1989.

“On select dates, the conservator will perform the conservation treatment during open hours, answering questions from the public about the protocols and processes of modern art conservation. Three works by Pollock from MOCA’s permanent collection, dating from 1943 to 1951, will also be on view, exemplifying a range of materials from watercolor to collage.”*

Independent conservator Chris Stavroudis will be working in-gallery on the treatment of Pollock’s NUMBER 1, 1949 (1949) on Thursdays in April and May, and will be available for Q&A sessions from 11:30 am to noon and from 5:30 to 6:00 pm. 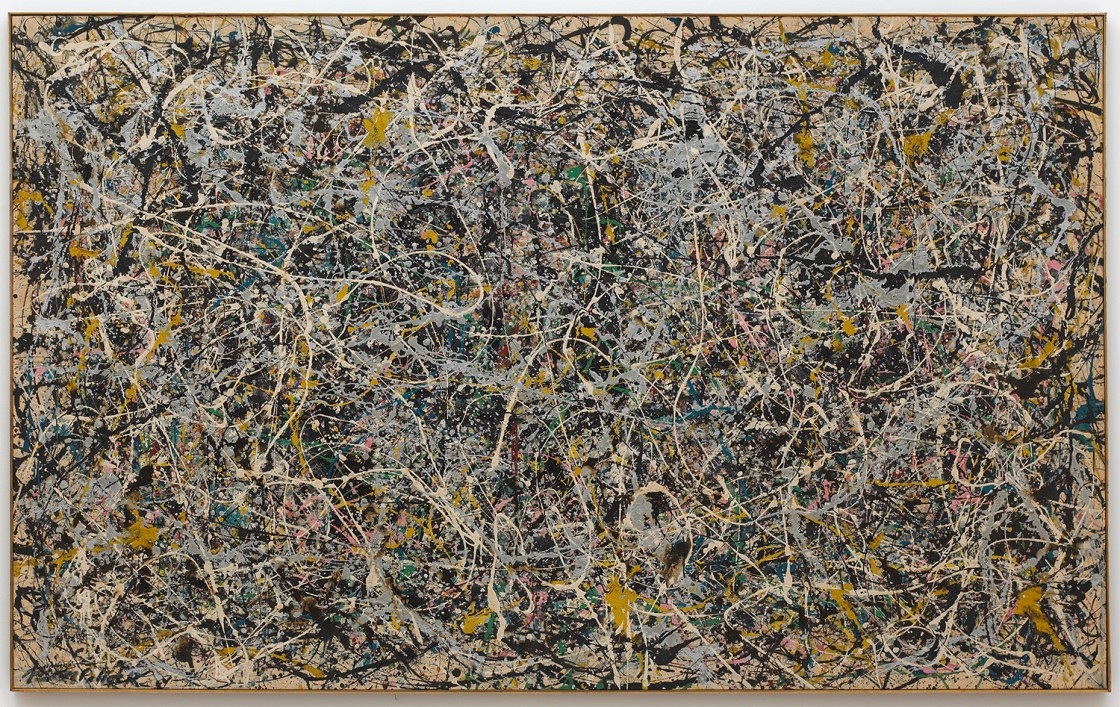