Join Sam Pollard for an online talk about his new documentary MLK / FBI. The conversation is presented by the International Documentary Association and moderated by Lisa Kennedy.

See links below for information on the IDA event and streaming the film.

“Most of us hide most of the time. We don’t want people aware of what we are feeling. But that day, very few people were hiding. It was a consistent wave of emotion without interruption.” — Paul Fusco

THE TRAIN—RFK’S LAST JOURNEY—a three-part exhibition at the San Francisco Museum of Modern Art—documents the funeral train of Robert F. Kennedy as it traveled from New York City to Washington, D.C., for Kennedy’s burial at Arlington.

The first section features Paul Fusco’s photographs for Look magazine, taken from the train of the crowds—estimated at nearly one million—who lined the route. The second brings together photographs and home movies taken by members of the crowd of the passing train, collected by Rein Jelle Terpstra in his project The People’s View (2014–18). And lastly, the museum will screen the 70mm film June 8, 1968 (2010, directed by Philippe Parreno), a re-enactment of Fusco’s view from the train’s windows.

The exhibition was curated by Clément Chéroux and Linde Lehtinen.

See: youtube.com/watch which includes a segment of RFK’s eulogy by Edward M. Kennedy at St. Patrick’s. 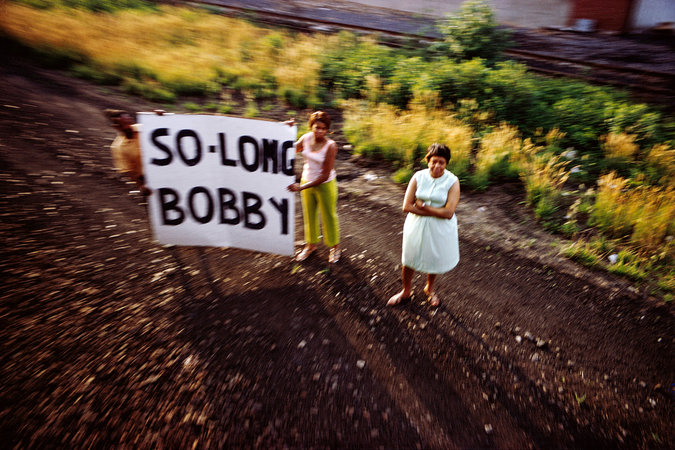