Reluctant to be “subsumed within the arts-financial complex,” Forensic Architecture founder Eyal Weizman is ambivalent about the collective’s Turner Prize-shortlisting last week.

“I loved American music. From the age of about 10, every week you’d discover somebody new. I was very much into jazz. You know how English people are; there’s a certain amount of musical snobbery. I mean, I loved Little Richard and Fats Domino, but when I heard Charlie Parker for the first time, this was something I really loved, and nobody else who I knew knew anything about him. It’s good to have your private obsessions.” — Bryan Ferry*

“Roxy Music has revisited their 1972 self-titled debut album with a 45th anniversary reissue packed with unreleased demos, outtakes, radio sessions and more. ROXY MUSIC—45TH ANNIVERSARY EDITION is out now in a variety of formats, including a 3CD/DVD super deluxe edition that also comes with a 136-page book.”**

The DVD includes video footage of “Would You Believe,” “If There is Something,” “Sea Breezes,” and “Virginia Plain” filmed in 1972 at Bataclan.

“Memoirists are seldom as precise as novelists.” — Gore Vidal*

Chris Kraus, Tisa Bryant, Anelise Chen, and Q.M. Zhang will be at USC this week for a discussion on “hybrid storytelling” and the widespread influence of Kraus’ first book I LOVE DICK (1997) since its republication a few years back.

This three-channel video installation in its own dedicated “cinema” has been drawing crowds who tend to stay for the entire running-time and then watch it again.

From Adrian Searle’s Guardian review after CONVERSATION’s first appearance in 2012:

“The best work in the [Liverpool] biennial is undoubtedly Akomfrah’s THE UNFINISHED CONVERSATION, a three-screen video based on the life, work and talk of the incomparable Jamaican-born thinker Stuart Hall. Much more than biopic, Akomfrah juxtaposes archive news footage, readings of William Blake, Charles Dickens, and Virginia Woolf and most of all Hall’s own voice, to describe the world’s tumbling. Hall’s thoughts about identity, immigration and selfhood, evolve through a roar of telling images. The film, like the essence of Hall’s work, is about the conundrum of being in the world, and is as unexpected as it is brilliant.”*

Courtesy the artist, the Warwick Arts Centre, and Carroll Fletcher. 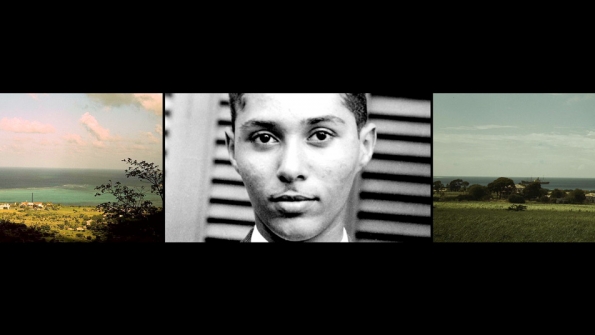